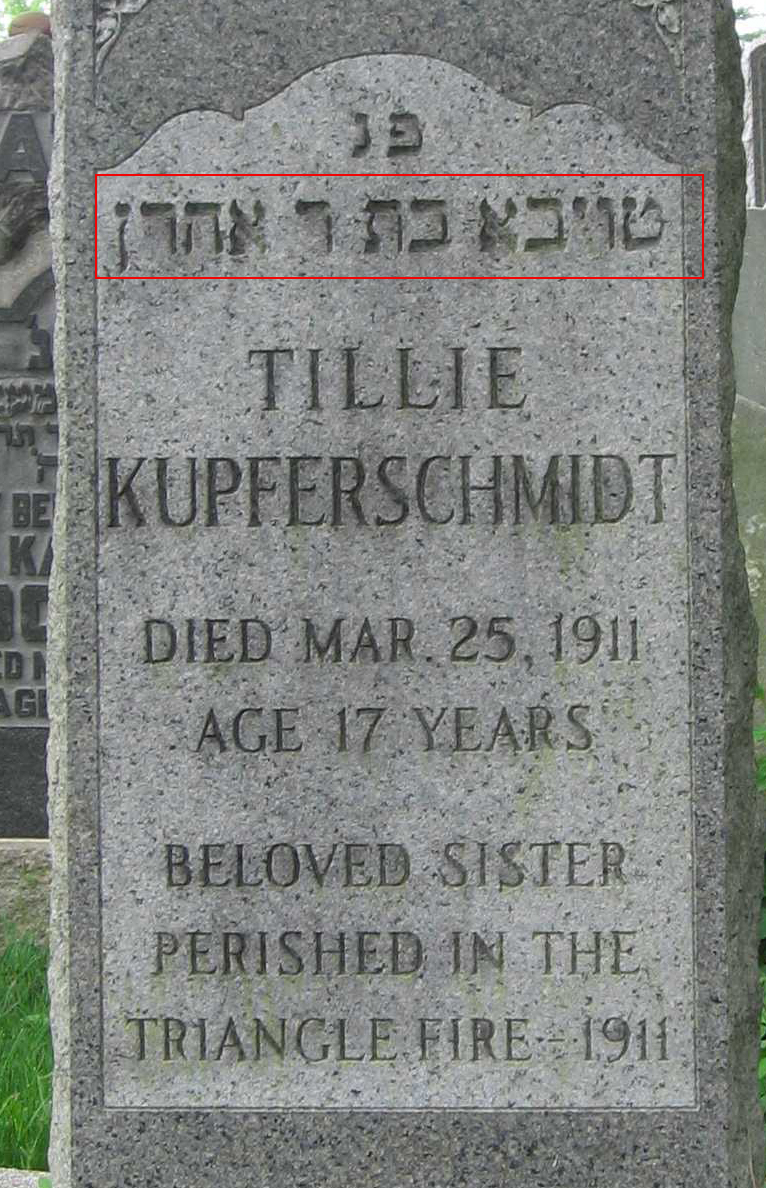 Apparently nothing if you live in Israel.

All my life I’ve always heard the religious “patronymic” name called in synagogues as the name_ben or bat_father’s name_and_mother’s name. I have seen on old gravestones the use of only the name of the same-sex parent (as well as the use of the Aramaic “bar” instead of the Hebrew for “son”) or even just the father, as in the stones on the right. The example at the top reads in Hebrew “Dov ben Mordechai” for the husband and “Chana bat Simcha” for the wife, clearly using the same-sex parent only. Example 2 reads in Hebrew “Toyva bat Aharon”, clearly using only the father’s name. These are both old gravestones, as can be seen by the dates, and thus represent real “tradition”. I have never seen the use of only the mother’s name for a male, unless only the mother was Jewish.

That is until I watched the Israeli TV series “Srugim” on Hulu. In Season 2, Episode 1, the character Yifat goes with her friend Hodaya to the Kotel before her wedding and intends to say blessings for her single friends to find a husband. To that end she asks Hodaya for her mother’s name in order to say the blessing. Hodaya states “bat Miriam”. So, I thought OK, they’re using the old way of just saying the name of the same sex parent. But then, later in the same episode Amir, who is marrying Yifat, makes two blessings on men. The first occurs on a stranger he meets when he goes to a spring in the desert to immerse himself before the wedding. As it’s considered good luck to receive a blessing from a bride or groom, Amir says one over the man’s head and the man tells him his name is Eliezer Lipa ben Bella – does this man only have a mother, no father? Amir once again makes a blessing on his friend Nati in the wedding location right before the ceremony, calling him Nataniel ben Hadassah. We know at least the character Nati has two Jewish parents because his father plays a very prominent role in the entire second season and to a certain extent in the third season. So, what the fuck?

I don’t recall ever being in a situation of hearing this when I lived in Israel, but I haven’t been there in 25 years. So, it would appear that it has become the custom in Israel to only use the mother’s name in religious contexts. If so, this is an example of the maniacal obsession of matrilineal descent that has taken hold in the Jewish community. It’s an even better example of the Orthodox making shit up and then claiming that it’s a Jewish custom.

So, while we’re on the subject, I’d like to pose a challenge to readers. Can anyone find a single patrilineal character in any Israeli TV series or movie? As an avid watcher of both, I’ve seen a (very) few characters of matrilineal only Jews, but not a single patrilineal, not even a little bit part, like a cameo. Considering the fact that there are reported to be approximately half a million of us there, that’s a very glaring omission. When a society wants to pretend a group of people doesn’t exist you know they are in denial and you know they are ashamed of what they are doing. If you are proud of how you live you wouldn’t hide it.